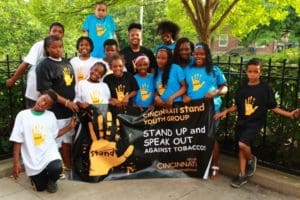 Cincinnati STAND Campaign is a youth-led campaign to encourage kids, ages 11-17, to stand up and speak out against tobacco. The group aims to eliminate the cultural acceptance of tobacco use and counter tobacco advertising.   The Centers for Disease Control and Prevention (CDC) affirms that tobacco is the leading cause of preventable death in the United States, accounting for more than 480,000 deaths annually (including deaths from secondhand smoke).

Each day, approximately 2,500 kids try smoking for the first time.   According to the Ohio Department of Health (ODH), nearly nine out of 10 smokers report they started using tobacco before age 18. This is why Cincinnati STAND focuses on preventing youth smoking initiation. ODH launched a statewide campaign to engage kids, ages 11-17, in interactive, anti-tobacco initiatives, and selected the Cincinnati Health Department (CHD) as a grant recipient.

CHD worked with Cincinnati Metropolitan Housing Authority (CMHA) to create and implement their smoke-free housing policy, which went into effect in 2016. Building upon that relationship, CHD chose to launch Cincinnati STAND Campaign with kids living in CMHA properties within the city limits. CHD selected Winton Hills, Spring Grove Village, English Woods, North and South Fairmount, and Evanston as priority communities for the campaign.

Traditionally, stores in underserved communities have higher numbers of tobacco ads displayed, as well as a greater percentage of retail ads dedicated to tobacco. In addition to increased exposure to tobacco advertising, residents in these neighborhoods experience health inequities that are caused by unequal access to social, political, economic and environmental resources. 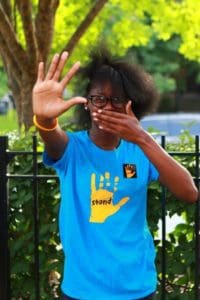 Tobacco companies spend more than $1 million per hour marketing their products at the point of sale (POS). This type of marketing disproportionately affects groups such as youth, racial and ethnic minorities, and those with low income or education. POS marketing tactics include advertisements, price promotions and product displays.

This year, the youth groups conducted tobacco store assessments to collect data on how tobacco products are being marketed in their communities. Of the 14 stores that were assessed, 100% offered flavored tobacco products (appealing to kids) at prices less than $1.00 each (affordable for kids).     The group will continue conducting store assessments and sharing their findings with community leaders and members.

Check out this list of great Cincinnati summer jobs for teens! 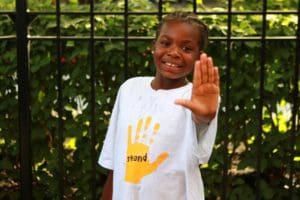 Cincinnati STAND Campaign is committed to de-normalizing tobacco use amongst their peers. Approximately 20 youth ages 11-17 are actively involved in neighborhood outreach, media appearances, community partnerships and social media engagement.   The goals of the campaign are as follows:

1)   Educate youth about the hazards of using tobacco products, including e-cigarettes, vape pens, and hookahs.

2)   Educate community leaders and members on the tactics used by tobacco companies to target youth and our communities.

3)   Advocate for the adoption of comprehensive tobacco-free school policies in Cincinnati.

4)   Conduct tobacco retailer compliance checks to ensure that tobacco is not being sold to kids under 18 years of age.

The Cincinnati STAND  Campaign will continue to share their anti-tobacco message with their peers by using traditional and non-traditional marketing channels, such as participating in community parades and public events, presenting to youth groups and community partners, distributing information in their neighborhoods, sharing content on social media and creating artwork with anti-tobacco messages. 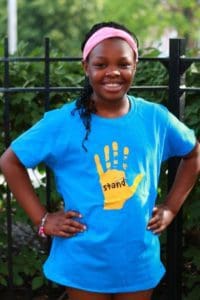 Members of the group are available to speak to the young people in your community if requested. When you see us out in public, wave and stop at our booth for more information on how to keep teens from smoking tobacco. Tell everyone about us, and share our messages on social media.