Mental health in Black Cincinnati is done flying under the radar. It is time to educate ourselves and take action. 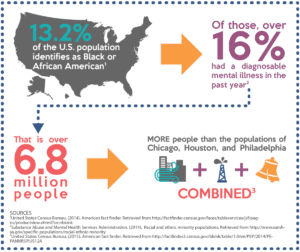 July is Minority Mental Health Awareness month. It is reported that 1 in 4 people in the world will be affected by mental or neurological disorders at some point in their lives. Even though minority mental health is only given consciousness for one month, it should be advocated for every day.

What do you know about African American Human Trafficking?

According to the Health and Human Services Office of Minority Health, African Americans are 20% more likely to experience serious mental health problems than the general population. Mental health problems include depression, Attention Deficit Hyperactivity Disorder (ADHD), Posttraumatic Stress Disorder (PTSD), and suicide. Today, music artists and humanitarians use their platforms to bring awareness to these issues. Hip-hop artist Logic released   1-800-273-8255, in 2017 to raise awareness about suicide.

It’s common for situations like these to lead African Americans to faith leaders to discuss their issues, rather than a licensed professional. Church clergies are now being trained to counsel depression and mental illnesses from the members of their congregation. Some may see this as inadequate treatment, although it is the help that many are seeking. Read more about it in the below facts.

1. The rate of African American adults who suffer from depression and receive mental health treatment or counseling is half the rate of Caucasian adults.

2. There are six signs to know if you or someone you know may be experiencing mental health issues.
– Anxiety
– Hopelessness
–Irritability or being easily agitated
– Isolation from the core group or a previously enjoyed activity
– Stress
– Self-medicating with food, alcohol, drugs or other substances.

3. Most low-income African Americans who suffer from mental health issues only access treatment when they are incarnated, hospitalized or homeless.

“What plays a greater role in mental health than race is socioeconomic status. People who live under the poverty level have greater barriers to treatment. Because of this, most persons in poverty, including many African Americans, will access treatment only after they have been incarnated, hospitalized or homeless”, says Kandi Staples, MSW, LISW-S.

According to a 2015 survey by the U.S. Center for Disease Control and Prevention, Black adults ages 18 and over are marginally more likely to report serious psychological distress than White, with 3.4 and 3.2 percent of the population respectively. However, other factors such as joblessness, poverty, and incarceration affect rates of mental health issues as well. The same survey reports that serious psychological distress is at least twice as likely to be reported in Black adults living below the poverty line than those living above it. 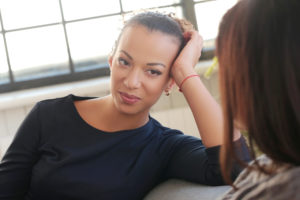 Research shows that over 90 percent of African Americans believe that prayer is important in dealing with stressful life events versus 66.7 percent of Whites. African American clergy has an impressive history of service within the Black community. The church, so to speak, can provide counseling and relief of social stressors for its community and congregation, if proper programming is in place. A 2016 study provided church clergy with Depression Training Workshop.

These Cincinnati Veteran Assistance Programs are at your service.

The good news is a 2017 Interact for Health Community Survey reports that African Americans in the Greater Cincinnati area are getting the help they need as 45 percent feel they do an excellent or exceptionally good job managing their stress.

Here are a few resources in the Cincinnati area for individuals and families suffering from mental health issues.

Cincinnati VA Medical Center is a branch of the Cincinnati Veteran Affairs that provides evaluation and treatment for a variety of issues that can impact the emotional health and well-being of veterans.

Greater Cincinnati Behavioral Health Services is one of the largest mental health agencies in the area, serving individuals in Cincinnati through a variety of programs since 2004.

Urban Minority Alcoholism and Drug Abuse Outreach Programs of Cincinnati is a state-funded organization designed to combat drug and alcohol abuse among African and Hispanic Americans in Ohio. They provide a selection of services for various ages.

Mental Health First Aide helps you assist someone experiencing a mental health or substance use-related crisis. In these courses, you learn risk factors and warning signs of mental health and addiction concerns, strategies for how to help someone in both crisis and non-crisis situations, and where to turn for help for adults and youth. Find a course near you to learn more about mental health in Black Cincinnati today.

Mental health is a critical concern for everyone, young and old. If you know of programs in the area or information we have missed, please let us know at The Voice of Black Cincinnati.