In 2006, after taking inventory of the landscape of the music scene and seeing his beloved genre transform from syncopation and assonance to material glorification and drug selling, hip-hop luminary, Nas, released his eighth studio album entitled, Hip-Hop is Dead. Of course, unlike disco, the genre had not gone anywhere, but rather it no longer appeared to be what it once was.

In explanation of his viewpoint, Nas would go on to say, âWhen I say, âhip-hop is dead,â basically America is dead. There is no political voice. Music is dead. Our way of thinking is dead. Our commerce is dead. Everything in this society has been done. What I mean by âhip-hop is deadâ is weâre in a vulnerable stateâ¦ I think hip-hop could help rebuild America, once hip-hoppers own hip-hop.â

The History of African Americans in Cincinnati

Similarly, I believe the Black Church is dead. Of course, many African-Americans still attend church, but rather it no longer appears to be what it once was. Let me quickly address the elephant in the room. How can a church be âblack?â It was Dr. Martin Luther King Jr. who said, â11 oâclock Sunday morning, is the most segregated hour of America, and the Sunday School is the most segregated school of the week.â

When it comes to the Black Church in America, African transplants were not offered any other option. Richard Allen, the founder of the African Methodist Episcopal denomination, affirms these sentiments when he said in the 1790s, âI saw the necessity of erecting a place of worship for the colored people.â

As America progressed, the Black Church became the hallowed institution in the community where African-Americans came for not only spiritual comprehension but social interaction, temporary refuge and political insight as well. The church tended to address the specific needs and issues which affected their members. Which also leads to the fact that every âblackâ church is primarily different.

Even within the same denominations, many churches operate autonomously due to the numerous differences found amongst Black communities which were reflected within their community churches. Black communities situated in urban areas typically differ from those in suburbia.

In 2010, professor Eddie Glaude, Jr. eulogized the National Black Church in an article of the same name, but this internment is regarding the city of Cincinnati. Being a conduit of the underground railroad, the city of Cincinnati has a rich history steeped in the African-American religious community.

When having a conversation regarding prominent Black churches in Cincinnati throughout the times, names like Allen Temple A.M.E., Union Baptist and Mt. Moriah Baptist must be brought up. Names like Rev. L. Venchael Booth, Damon Lynch Jr., Abraham Isaac Jacob Swanson XII, and civil rights activist, Fred Shuttlesworth, ring bells in the ears of most baby boomers.

But gone are the days in which the church, black or white, operates as the linchpin of the neighborhood. Several factors contributed to this. To start, migration occurred. At one time, most congregations were comprised of people who lived in that neighborhood. As opportunities arose, whether financial or occupational, people began to move where they thought they could create a better life for their families. Forest Park and Lincoln Heights were once considered the mecca for African-Americans in Cincinnati. If you resided in those areas, it was because you had the means to do so.

Consequently, those same dollars did not always make their way back to the churches that remained in the urban context. Not to mention, Cincinnati is built in silos. Every neighborhood was built to be self-sufficient. Many do not leave their neighborhoods, except for work, because everything they need is within a two to five-mile radius. So, the more people spread out, the more they lacked the solidarity the Black Church provided. It went from a loud, central voice to multiple quieter ones. 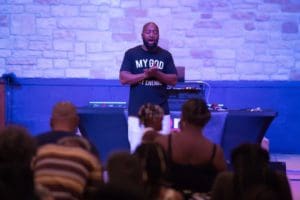 With changing neighborhoods, the church forfeited the thing that brought the people through the doors, community involvement. There was a time when going to church on a Sunday was an unwritten rule for African-Americans. But now, church attendance is down statistically. Particularly for mainline denominations. So, if a church closes its doors and there is no uproar or public outcry, it may stem from its lack of connection with the people that surround it.

People donât care how much you know until they know how much you care. No presence of community outreach, in addition to more congregants that drive into the neighborhood, then live in it, the church creates more of a parking malaise on Sunday mornings than becoming a beacon of hope Monday through Saturday.

Because the Black Church has relied on its tradition as a go-to means of evangelism, âmemory has become its currencyâ and has failed to keep pace with an ever-changing society. Many of Cincinnatiâs Millennials and young professionals opt to stay at home or attend more progressive, predominantly white churches such as Crossroads or the Vineyard, not because they speak to their plight, but because they do not have to travel back in time when they walk through their doors.

The feel of nostalgia is reserved for weddings and funerals, but the Sunday morning experience is a production of sorts with lights, cameras and action that mimics any well put together television show. Lack of resources aside, because the physical edifice of the Black Church has been viewed as sacred space, it has been hard to convince the need of secular devices, i.e., cameras, screens, stage lights, etc. to enhance an experience that in theory should never need enhancing.

In another 10 to 20 years, the Black Church in Cincinnati could cease to exist because Cincinnati is doing a masterful job of eradicating any semblance of black communities. Many of the longstanding neighborhoods that were once considered predominantly African-American are being whitewashed or gentrified, and the churches that existed in them are being forced out or selling out. Avondale primarily belongs to Childrenâs Hospital and the Cincinnati Zoo. Evanston belongs to Xavier. The West End will soon be home to FC Cincinnati and the developments it will bring with it.

As properties are being swallowed up, structures are being created that do not have the black experience in mind. House of Joy recently sold their property in College Hill for redevelopment purposes. Bible Way Church of God in Christ, a longtime presence in Walnut Hills, was uprooted. Corinthian Baptist is being forced to move for highway expansion.

The question to be considered: would our churches be approached if they had a greater voice in the city? No one has approached majority white congregations to vacate their churches to enhance the neighborhood.

The Black Church in Cincinnati has sacrificed its prophetic voice for simply keeping the doors open. Beyond the occasional march to protest a homicide, where has the church gone? And does anyone care? Echoing the sentiments of professor Glaude, âThe death of the black church as we have known it occasions an opportunity to breathe new life into what it means to be black and Christian.â

We are in a vulnerable state. We can help resurrect the Black Church once the church recognizes the sense of urgency and decides to stand up and rely on our past to challenge our future, abandon the need to be âpuppets for profitâ and be the prophetic voice that cries out in the wilderness.

Dr. Mike Scruggs, Sr. is the Senior Pastor of Light of the World Church, adjunct professor, author and rebel without a pause.